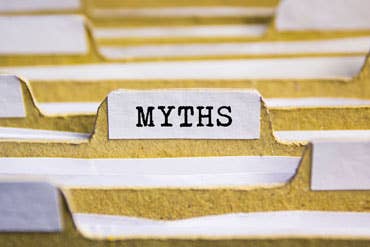 One thing is for certain: Blockchain is quickly becoming a technology that is gathering momentum. The other thing that’s certain? When it comes to using the technology, it’s like folding a fitted sheet. No one really knows how.

There’s so much more to this technology than meets the eye and so, to save everyone trouble, I decided to post some common misconceptions about it.

#1 – Blockchain is just for cryptocurrencies.

I’m sorry I didn’t answer the phone when you called. I don’t use it for that.

Much to the dismay of people who want to get a hold of me, I never use my cell phone for its intended purpose—calling. This is the same thing with Blockchain. People typically associate Blockchain with mining for bitcoins or executing a transaction in exchange for cryptocurrency—but it’s not the only thing it can be used for. In its most simplest form, Blockchain is a highly secure, decentralized database that is crowd-sourced by all the players in your authorized ecosystem. Everyone has a copy of the database so just like fans watching a football game in the stands, everyone can look at the scoreboard and effectively know the score at all times.

For business enterprises, this technology changes the game. Think about it. Whether you’re a Fortune 500 company or a small mom-and-pop shop, everyone takes a walled garden approach to data. Blockchain effectively knocks down these walls and makes data recording, authentication and monitoring a team sport.

Blockchain’s inherent ability to securely “crowd-source” its data allows our marketplace to collect “part events” during its life cycle. For example, every time a part is listed, that event is stored on the Blockchain ledger. When a part is repaired or dismantled from an aircraft, we are able to record that event if we’re connected to the right ecosystem players. Finally, every part sold on our marketplace has its bill of sale transaction recorded. Forever. Why is this significant? Blockchain’s bread-and-butter benefit is that it manufactures trust between two parties without human intervention. Our marketplace uses Blockchain to digitally build that trust into the transaction by providing more transparency on the assets for sale.

#2 –Blockchain is just a glorified database.

I’ve always been a big fan of less is more. Unless it’s kindness. Or sleep. Or toilet paper. But this question comes up a lot in the context of, “If you’re just trying to record transactions, is Blockchain too much for what you’re trying to do?”

There are a few points of clarification here. First, Blockchain uses a decentralized database structure—which means that all participants (who spool up nodes of their own) will have an exact replica of the database contents. Second, the fact that it is decentralized is one of the most important aspects of the technology. Its decentralized nature means that it doesn’t rely on a central point of control. Think about all that money made by title companies when they simply run a report to tell you that the title of a house you want to buy is “clear”. Or, think about the escrow companies that hold money to ensure that Party A and Party B uphold the contractual terms of a transaction? All these “institutions” that sit between Party A and Party B make money because there’s not enough trust to execute on the deal. The theory is that these "Big Brother" or "All-Seeing Eye" institutions could effectively go away using Blockchain. So in short, it's not just a glorified database. It's a very special (decentralized) database. See the difference?

P.S. The real estate industry is just ripe for picking.

Above I mentioned everyone’s love of the “walled garden data” approach (in other words, sharing is not caring). But think about how scary Blockchain sounds—especially for large enterprises where data transformation is becoming big business.

With Blockchain, everyone knows the score which means everyone will have access to your data, right? Not always. The amazing thing about Blockchain is that each transaction (which ultimately makes up a block when enough transactions are accumulated) can be stored with a certain set of required fields but other fields can be captured and suppressed. For example, on our marketplace, some information related to a bill of sale transaction can be highly sensitive such as price. In this case, some authenticated users on our Blockchain can see price information but some can’t. The bill of sale event is still captured, along with important elements such as the previous and new owner, but for now, we have decided that sales price should be suppressed (because we never want to share data that could be harmful to our seller community). The other cool thing about Blockchain? It’s software so it's easy to change. If we ever want to show price, we just change the code to remove the suppression.

This is just not true. And in the case of aerospace, this is really, really not true. In fact, I don’t think anyone would disagree with me when I say that aerospace is basically at Ground Zero with this technology. Have use cases been deployed? Sure. Are there some useful production applications out there? Eh, kind of? But the bottom line is that the number of aerospace production Blockchain applications where people or enterprises are actually using it day in and day out are few and far between. Not to toot our own horn (which I have no problem doing because this is my blog) but Honeywell is the only company I know of that has fully integrated Blockchain technology into its aerospace manufacturing process. Every second, two parts come off our assembly lines (across 40+ global sites) and the birth records are always written to the ledger. Now that is pretty cool stuff.

The irony of our current situation is that the success of this technology depends on EVERYONE using it. I run a gigantic marketplace with used aerospace parts for sale—and most of these parts have flown to the ends of the earth (and back). Why does this matter? It matters because in order for this “part pedigree” ecosystem to work, we need a full blown party train of participants.

I need to get dismantlers, repair shops, distributors and Original Equipment Manufacturers (OEMs) to start connecting through Blockchain. Without the help and support of the “crowd”, this “crowd-sourced” database is toast.

#5 – It will solve all of the world's problems.

I’ve read so many articles that tout the power of Blockchain.

It could have stopped the infamous USC college admissions cheating scandal. It could put an end to all high fashion knock-offs (fun fact: Blockchain by itself does nothing to combat counterfeit and you can read more about this misconception on my recent blog post here). It could rewrite the final episode of Game of Thrones. Don't even tease, man.

But I DO think it can be a serious game changer in certain industries. You’ve already seen it in the diamond industry, the financial services sector, the high fashion space—the list goes on. In order to figure out what it can do in YOUR industry, remember what it’s good at: It’s secure, it’s immutable (can’t tamper with the records), it’s crowd-sourced and it can interpret and execute rules using programming logic (versus a lawyer reading and interpreting a 100-page contract with her eyeballs). I mean, you guys, this is serious stuff. Make no mistake about it, Blockchain can solve big problems but not all. Like every technology that’s out there, there’s a time and place for everything.

If I could be so bold as to leave with some parting words of wisdom, it would be this. No one comes out of the womb knowing everything there is to know about everything. In other words, experts are made, not born, and I think this Blockchain world is still fair game for all of us. And the one thing I’ve learned on the Blockchain circus-journey Honeywell has been on? Just do it. And please, Nike, don’t come after me for trademark infringement, but seriously, just go out and do it. So many keep talking about the technology but not many people are actually doing anything with it. This isn’t a sprint, it’s a marathon so keep inching forward and be ready for a very, very long run.

Don’t just be an idea woman, be an inventor, brah. Be. An. Inventor.