One of the most important ingredients to successful innovation is the ability to connect the dots. In essence, the ability to connect what you know with something that, on the surface, doesn't necessarily look at all related. Sometimes it happens instantly, sometimes it happens over time, but connecting the dots has led to some of the most revolutionary inventions of our lifetime.

The perfect storm to connect the dots.

Eight weeks ago, I had that unique moment of enlightenment. For the past year, I had been working with our Honeywell Advanced Technology team (that's a fancy word for "engineers" that incubate our newest technologies) on marching forward with some of the most innovative Blockchain applications in the aerospace industry. Over the summer I had spoken on a panel with Mark Manning from ITRACE and Daniel Stanton from SecureMarking - both CEO and founders of technology start-ups that specialize in creating a permanent connection between a physical asset and its digital DNA. In essence, they provide technologies that help combat anti-counterfeit activities. The intriguing aspect of these start-ups? Blockchain is commonly associated with a technology to combat anti-counterfeit activities. But the kicker is that Blockchain by itself does nothing to fight off the bad guys. It's simply a highly secure way for everyone to know the score by leveraging a decentralized database that is crowd sourced. By itself, Blockchain would be like swinging at a baseball with a toothpick. Strrrrike! A few months after that panel, someone from our own internal Honeywell anti-counterfeit team reached out to see if we were actively looking at Blockchain applications related to anti-counterfeit. And then the light bulb turned on.

What each "dot" brought to the table

GoDirect Trade (powered by Honeywell) - Honeywell had invested heavily in our own Blockchain network which was designed to store / collect part pedigree data and robust enough to easily connect with other Blockchains. In order to provide consumers on our marketplace as much information about a used aerospace part as possible, we needed a technology that would allow us to start collecting this data across many individuals, repair shops, dismantlers and large enterprises.

ITRACE - Offers a technology (iTRACE 2DMI) that is best described as an "un-hackable" QR code. Their technology creates a secure, permanent connection between physical assets and the Blockchain.

SecureMarking and Honeywell Performance Materials and Technology - Offers a technology that is best described as "magic ink". The ink can be applied to a surface but based on its special formula, it can only be visible using a light reader at the right frequency.

So, what was the customer problem we hoped to solve?

For years, aerospace OEMs have instituted complex process checks to ensure authentic parts are used in the manufacturing process. For example, authorized distributor networks or manual checks on tamper-proof packaging are traditional methods used to confirm part authenticity. Similar to the looming threat of a cyber security attack or a diamond heist, nefarious counterfeit events don't happen every day in aerospace. The problem is that, despite the fact that the chances are slim, there is a ton of work and churn in the background to keep the bad guys out.

Once the dots were connected, how exactly did we make anything better?

Here's the canned marketing version: Honeywell has introduced a process that uses patented technology from iTRACE, SecureMarking and Honeywell Performance Materials & Technology to “mark” a part and then activate the authenticity and birth records on its digital Blockchain ledger. In aerospace, this is a first-of-its-kind technology that will simplify and transform supply chain operations. That explanation was so boring it belongs in a text book. BUT, at the crux of what it's trying to say, that is some really, really cool stuff. Insert dab here.

How does it work? 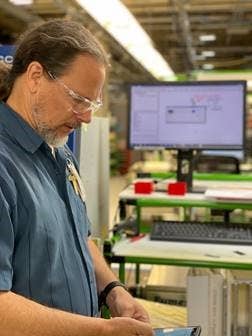 Next, high security ink provided by Honeywell Performance Materials and Technology (PMT) and SecureMarking is applied to the etching but is invisible to the naked eye. For this trial, we took two separate identification plates and applied the Honeywell PMT ink on one and the SecureMarking ink on the other. Below you can see a picture of the two separate ink solutions. 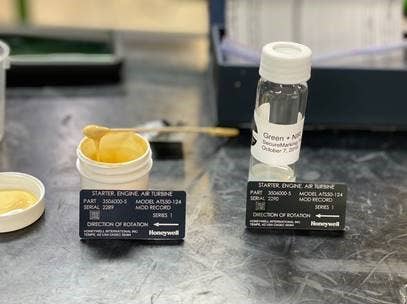 Next, a mobile app scans the 2D matrix and activates the digital authenticity record for the part. You can see from the picture below that this data, along with the part’s birth information, is forever recorded on Honeywell’s secure, digital Blockchain ledger. Like the Fed’s use of anti-counterfeit technology on the hundred-dollar bill, once the part continues its journey (from birth, to aircraft install, to aftermarket repair, to death), the two-factor authentication always follows the part. The 2D matrix can be scanned via a mobile app to confirm authenticity and a special light with the right frequency can activate the upconverting particles which make the “magic ink” visible to the naked eye, or to a special camera. 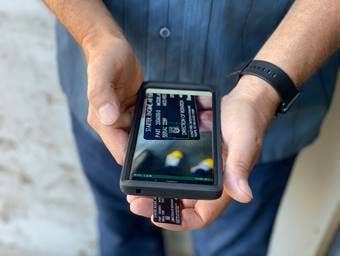 Lastly, the identification plate is positioned and adhered to the part per specifications. The very first aerospace part to be marked using this two-factor / Blockchain authentication technology! 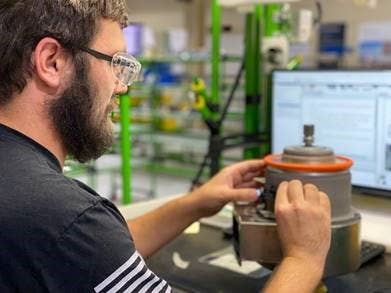 This doesn't seem like a fairytale scene where the animals clean everything for me. Is this really a happy ending?

Anti-counterfeit Blockchain technology isn’t just blazing a new trail for manufacturing. Its impact will have a rippling effect for the life of the part—and in aerospace, where used parts change ownership an average of four times, this transforms the entire aftermarket landscape. We need to imagine a world where a repair technician can scan a code and shine a pen light on the identification plate to verify it is a legitimate part. Every stop that part makes on its journey is tracked on the Blockchain and having this data can provide unprecedented levels of transparency. Not only have we connected the dots to link physical parts to the digital domain but this trial has really put the icing on top of the cake by layering anti-counterfeit technology with Blockchain.

Where are we headed from here?

As of today, I can honestly say that I believe we are still at Ground Zero when it comes to Blockchain applications in aerospace. Toilet paper and the internet are things you don't know what you have until it's gone and I truly, firmly believe that in twenty years, parts traceability using Blockchain technology will be in this special club. Obviously, I don't have a hot tub time machine to show me the future. But one thing I know for sure? There is still so much to learn in this space. The other thing that is certain? Honeywell is committed to further exploring the uses of this technology and scaling it where appropriate. We're the first ones at the table in aerospace to work with talented start-ups to apply a combined technology that might change the face of parts tracing and authenticity forever. It's certainly not an end but I'd say that's a pretty cool start.